The game’s heads-up display (HUD) is composed of two compact rectangles. The lower left-hand corner features a mini-map and compass for navigation, and a simplified objective notice above it; the lower right includes a compact ammo counter and health meter. The top right displays kill notifications of all players in-game. On the Windows version of the game, the top left features a chat window when in multiplayer. The mini-map, as well as the main game screen, shows symbols denoting three kinds of entities: blue for allies, green for squadmates, and orange for enemies, this applies to all interactivity on the battlefield. Battlefield 4 options also allow colour-blind players to change the on-screen colour indicators to: tritanomaly, deuteranomaly and protanomaly.

Weapon customisation is expansive and encouraged. Primary, secondary and melee weapons can all be customised with weapon attachments and camouflage ‘skins’. Most weapons also have a default setting for different firing modes (e.g. semi-automatic, automatic fire), allowing the player to adapt to the environment they find themselves in. They can “spot” targets (marking their positions to the player’s team) in the single-player campaign (a first in the Battlefield franchise) as well as in multiplayer. The game’s bullet-dropping-system has been significantly enhanced, forcing the player to change the way they play medium to long distance combat. In addition, players have more combat capabilities, such as countering melee attacks from the front while standing or crouching, shooting with their sidearm while swimming, and diving underwater to avoid enemy detection. Standard combat abilities are still current including, reloading whilst sprinting, unlimited sprint, prone and vaulting.

The single-player campaign has several differences from the main multiplayer component. For the most part, the player must traverse mini-sandbox-style levels, in some cases using vehicles, like tanks and boats, to traverse the environment. As the player character, Recker, the player can use two campaign-only functions: the Engage command and the tactical binocular. The Engage command directs Recker’s squadmates, and occasionally other friendly units, to attack any hostiles in Recker’s line of sight. The tactical binocular is similar to a laser-designator, in the sense that it allows the player to identify friendly and enemy units, weapon stashes, explosives, and objectives in the field. By identifying enemies, the player can make them visible without using the visor, making them easier to mark for their teammates. At one point, Recker will briefly lose the tactical visor, forcing them to only use the Engage command to direct his squadmates on a limited number of enemies.[5][6]

The campaign features assignments that require specific actions and unlock weapons for use in multiplayer upon completion. Collectible weapons return along with the introduction of collectible dog tags which can be used in multiplayer. Weapon crates are found throughout all levels, allowing players to obtain ammo and switch weapons. While crates hold default weapons, collectible weapons may be used whenever they are acquired and level-specific weapons may be used once a specific mission assignment has been completed by obtaining enough points in a level.[5][6] 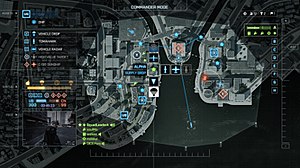 The new Commander Mode interface in Battlefield 4, showing an overhead view of the map “Siege of Shanghai”

Battlefield 4‘s multiplayer contains three playable factions—the United States, China, and Russia—fighting against each other, in up to 64-player matches on PC, PlayStation 4, and Xbox One (24-Player on Xbox 360 and PS3). A newly reintroduced “Commander Mode”, last seen in Battlefield 2142, gives one player on each team a real-time strategy-like view of the entire map and the ability to give orders to teammates. Also, the Commander can observe the battle through the eyes of the players on the battlefield, deploying vehicle and weapon drops to “keep the war machinery going”, and order in missile strikes on hostile targets.[7][8] A spectator mode is included, enabling players to spectate others in first or third person, as well as use a free camera to pan around the map from any angle.

On June 10, 2013, at E3, DICE featured the map “Siege of Shanghai”, pitting the People’s Liberation Army against the U.S. Marine Corps. The gameplay showcased Commander Mode; new weapons and vehicles; and the “Levolution” gameplay mechanic. The video displays the last of these at various points, including: a player destroying a support pillar to trap an enemy tank above it; and a large skyscraper (with an in-game objective on the top floor) collapsing in the center of the map, kicking up a massive dust cloud throughout the map and bringing the objective closer to ground level.[9][10] Levolution also includes effects such as shooting a fire extinguisher to fill the room with obscuring clouds, car alarms going off when stepped on, metal detectors going off once passed through, or cutting the power in a room to reduce others’ visibility.[9][11]

The four kits from Battlefield 3 are present in Battlefield 4 with minor tweaks. The Assault kit must now wait for the defibrillator to recharge after reviving teammates in quick succession. The Engineer kit uses PDWs, and carbines are available to all kits. The support kit has access to the new remote mortar and the XM25 allowing for indirect suppressive fire. The Recon kit is now more mobile and is able to equip carbines, designated marksman rifles (DMRs), and C4. Sniping mechanics also give with the ability to zero in your sights (set an aiming distance), and equip more optics and accessories than previous Battlefield games. The Recon kit is still able to utilize the MAV, T-UGS, and the Radio Beacon.[15][16][17][18]

New vehicles have also been introduced. With the addition of the Chinese faction, new vehicles include the Type 99 MBT, the ZFB-05 armored car, and the Z-10W attack helicopter. Jets have also been rebalanced and put into two classes, “attack” and “stealth”. The attack jets focus is mainly air-to-ground capabilities, while stealth jets focus mainly on air-to-air combat. Another vehicle added in Battlefield 4 is the addition of the RCB and DV-15 Interceptor attack boats, which function as heavily armed aquatic assault craft.

Customization options have also been increased in Battlefield 4, with all new camos available for every gun. A new “adaptive” camo has been introduced that can adapt the camo to the map being played without the player having to change camos every map. Camos can now be applied to jets, helicopters, tanks, transport vehicles and guns. Previously this option was introduced to parachutes but has been removed, emblems are now printed onto parachutes.

Battlefield 4‘s single-player Campaign takes place during the fictional “War of 2020”, six years after the events of its predecessor. Tensions between Russia and the United States have been running at a record high, due to a conflict between the two countries that has been running for the last six years.[19] On top of this, China is also on the brink of war, as Admiral Chang, the main antagonist, plans to overthrow China’s current government. If he succeeds, Chang will have full support from the Russians, helping spark war between China and the United States.[20][21]

Are you sure you want to delete clan?